The current digital environment is known for its menacing cybercrime. Being targeted by a hacker is getting more and more common. Concerningly, businesses seem to neglect it. Considering the threats, the fact that almost 50% of company networks can be breached by a hacker in just one step doesn’t surprise.

That’s why we want to raise your awareness and suggest the ultimate solution: Grey Box penetration testing. Penetration testing is an extremely effective way to find breaches. It can be done in two ways: Black Box and White Box methods. The Grey Box methodology collects the best of both and grants you security on a whole new level.

What is Grey Box testing? 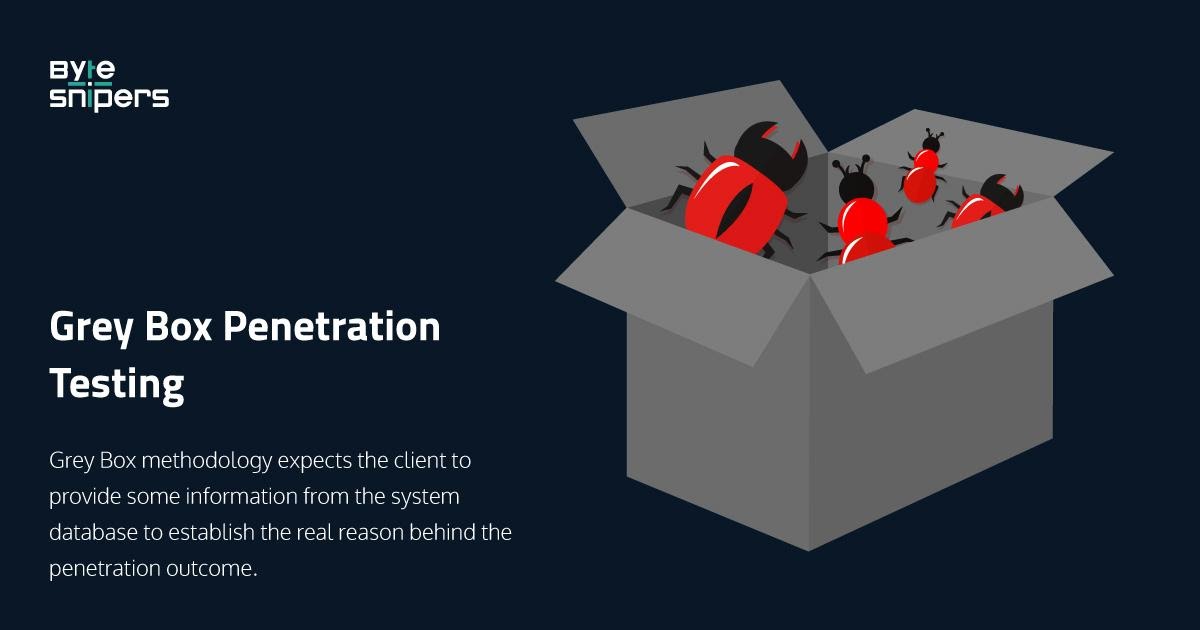 Grey Box testing is a combination of the Black Box and White Box methods. Grey Box puts both back- and front-end security to the test. It’s the best fit for web applications. This methodology expects the client to provide some information from the system database to establish the real reason behind the penetration outcome.

Looking at the average of 20 000 attacks aimed at web applications throughout the first two months of 2020, we strongly suggest opting in on your system security.

Regarding the information required for the Grey Box testing, pentest specialists usually ask for the following:

Although we’ve been describing Grey Box as the ultimate way to secure your system, by combining the two radically different penetration testing methods, you are bound to lose some beneficial qualities.

Rounding up the positive effects of the Grey Box methodology:

And the inevitable drawbacks:

Why is Grey Box testing the middle ground between Black and White Box testing? It’s because of the way a hacking attack was imitated. To get a deeper understanding of the 3 pentesting methodologies, let’s get through the remaining ones. 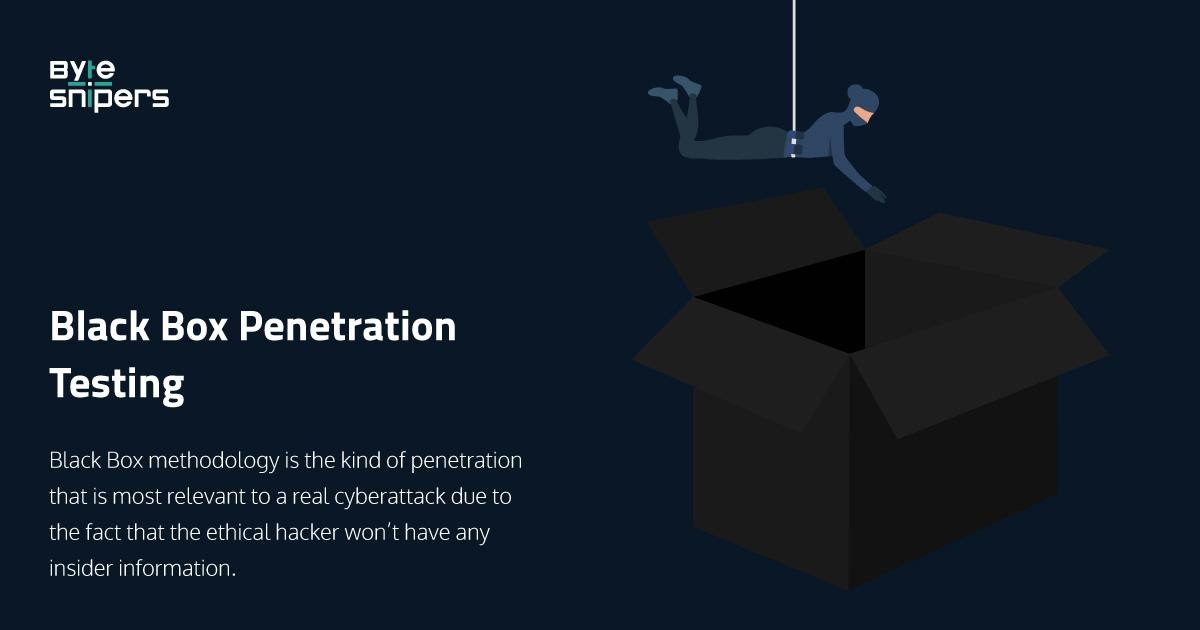 Black Box penetration testing is the kind of penetration that is most relevant to what is going to happen if your system becomes a target of a cyberattack. But don’t worry, it won’t harm your system due to its guidelines and restrictions being discussed during the negotiation with the client. It may be elaborated by social engineering attacks (for example, phishing) if needed.

The name of the methodology comes from the fact that the ethical hacker won’t have any insider information. Therefore, the system will appear to be “pitch black” for the intruder.

Its main benefits are the agility in regards to the efforts put to the test and the legitimacy of the penetration scenario due to the imitation of a real cyberattack. It has its own limits, though. Among these limits are: the inability to test the entire system due to the lack of information and besides the found vulnerabilities are tested only in the most simple vector, which makes the test not fully comprehensive. 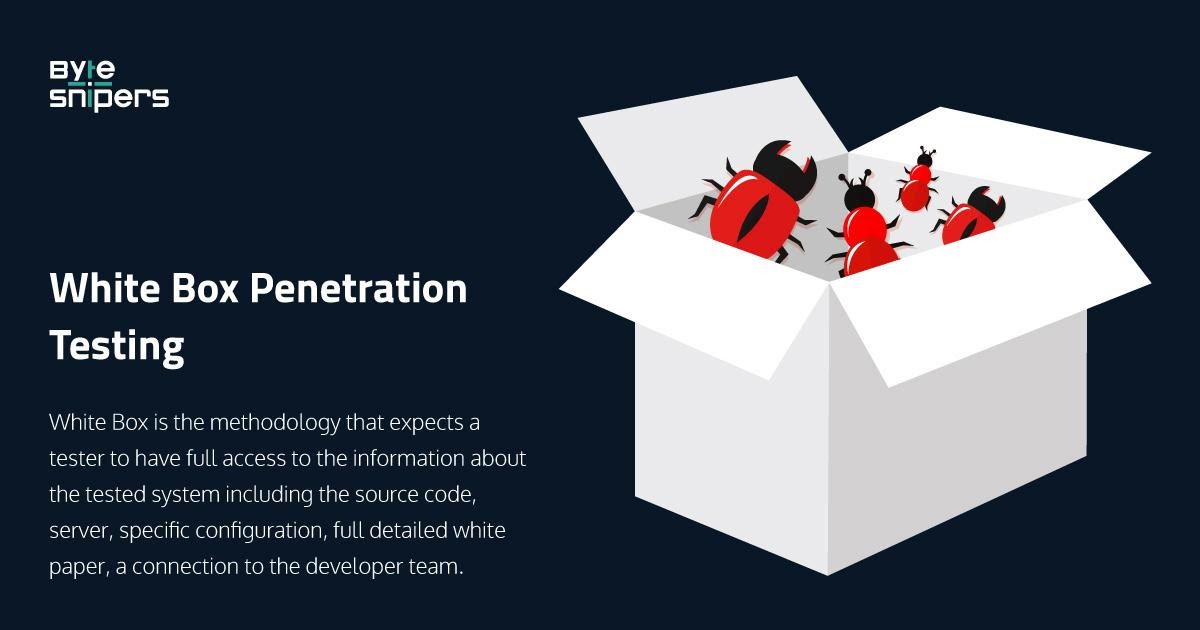 As you might have guessed, White Box is the complete opposite of the Black Box testing methodology. While executing this method, the tester must have full access to the information about the tested system including the source code, server, specific configuration, full detailed white paper, and a connection to the developer team.

The White Box method has a wide range of benefits including much more comprehensive outcomes, locating system flaws at the architecture level, and being able to test during the development stage. But, it’s considered much more expensive and time-consuming. On top of that, it lacks the viewpoint of a malicious hacker.

Are you ready to choose the methodology to find your system's vulnerabilities?

Understanding the nature of the three dominating penetration testing methods, you can now choose for yourself what fits the needs of your organization most. Although Grey Box is gaining popularity, it might not fit the most sophisticated systems.

If you’re confused about this topic, or you have questions, then feel free to give us a call. We are dedicated to helping you to find the best security solution for your organization!

7 Devastating Cases That Could Have Been Prevented By Security Testing

Mobile apps have grown to be one of the most significant parts of our daily life. Smartphones are one of the prime ways of accessing the internet in most of the leading and developing countries. Therefore, enterprises possess a lot of their user’s private data that they owe to keep in private.

Considering how deeply IoT devices are integrated into our daily lives (and lots of these devices run on the Android OS), the danger of losing access to our data is only growing. Take for example this massive mobile app data breach in 2018. As a result of the attack, Air Canada claimed that hackers gained access to their database containing passport numbers, expiration dates, frequent traveler NEXUS numbers, and birth dates of up to 20,000 users. Most of these are sold on the Dark Web, creating a significant risk of identity theft. Cyber-attacks can significantly damage an organization which further affects the entire working process. 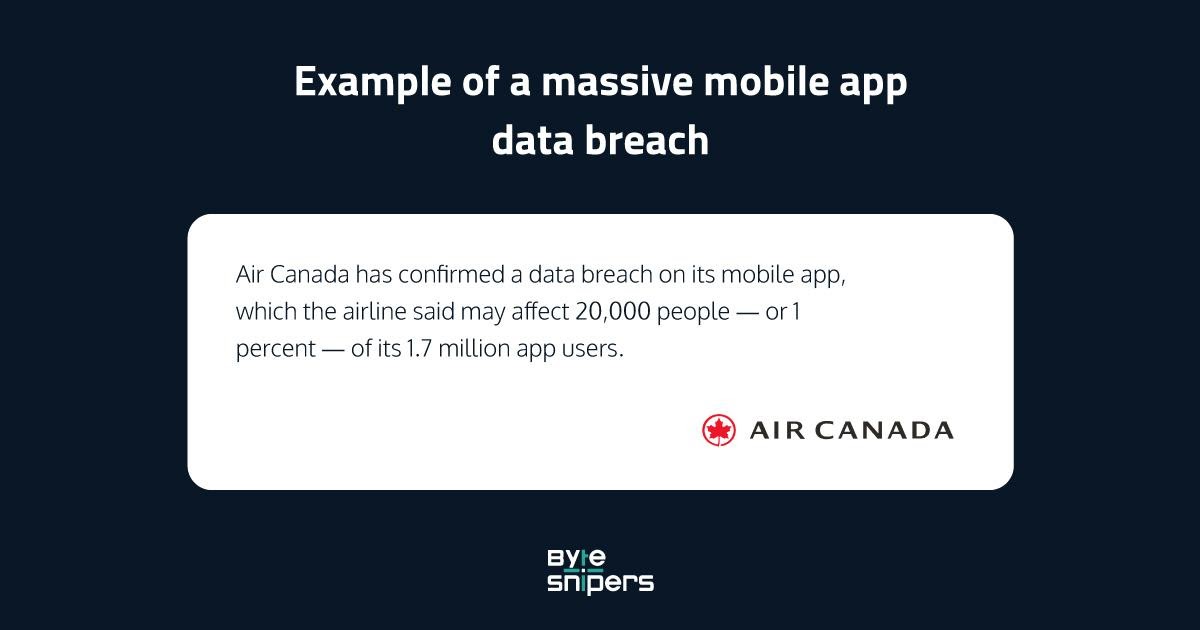 Two principles we highlight at ByteSnipers is safety and convenience. Usually, tech companies want to offer the best UI and customer experience, but at ByteSnipers we think it is equally important to build a robust and secure application.

An efficient way to enhance app protection is to identify all the vulnerabilities and fix them regularly. Today, we look at the importance of regular updates and releases. This guide offers a repeatable procedure for organizations to follow that is key to avoid being the victim of a cyberattack.

According to Verizon's 2019 Data Breach Investigations Report, malware consistently ranks as the least common method to attempt a data breach, falling behind even physical assaults. This is due to both the existence of mobile malware and the security built into current mobile operating systems.

Let’s take a look at the easily ignored threats when it comes to security. 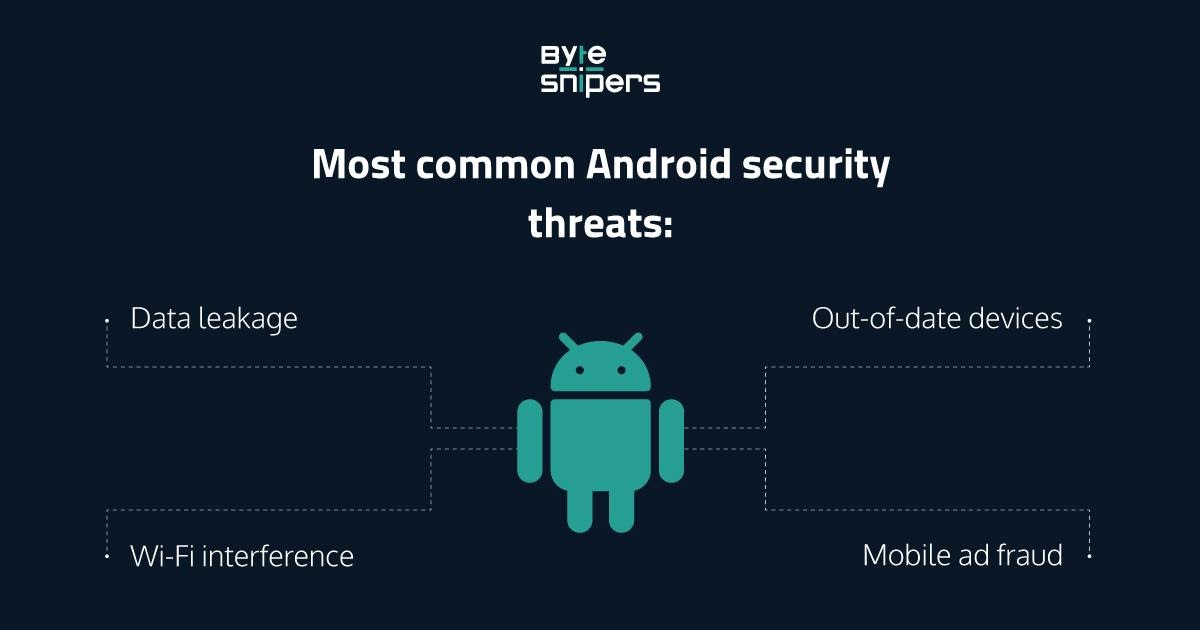 As sad as it sounds, data leakage is widely seen as among the most troubling corporate safety threats in 2019. Remember the almost non-existent risks of contamination with malware? According to the latest study by Ponemon, when a data breach occurs, businesses have approximately a 28% probability of experiencing at least one breach over the next two years. In other words, one breach will occur in four chances.

What keeps the problem particularly vexing is that, by default, it is often not on purpose, it’s mostly a matter of users unintentionally making ill-advised choices on which apps can see and move their data.

Mobile devices that connect to unsecured Wi-Fi can be easily exploited. A wireless access point (WAP) or wireless network connection is not necessarily unsafe. But without any form of encryption or security protection, anyone can see the flow of data and it becomes insecure. Most of us are guilty of using public Wi-Fi without knowing whether it can be trusted. That suggests that our information is sometimes not as secure as we would assume.

How critical is this? Accordingly to Wandera’s research, nearly a quarter of devices have connected to open (and possibly dangerous) Wi-Fi networks, while 4% of these devices have encountered a man-in-the-middle assault over the last month. 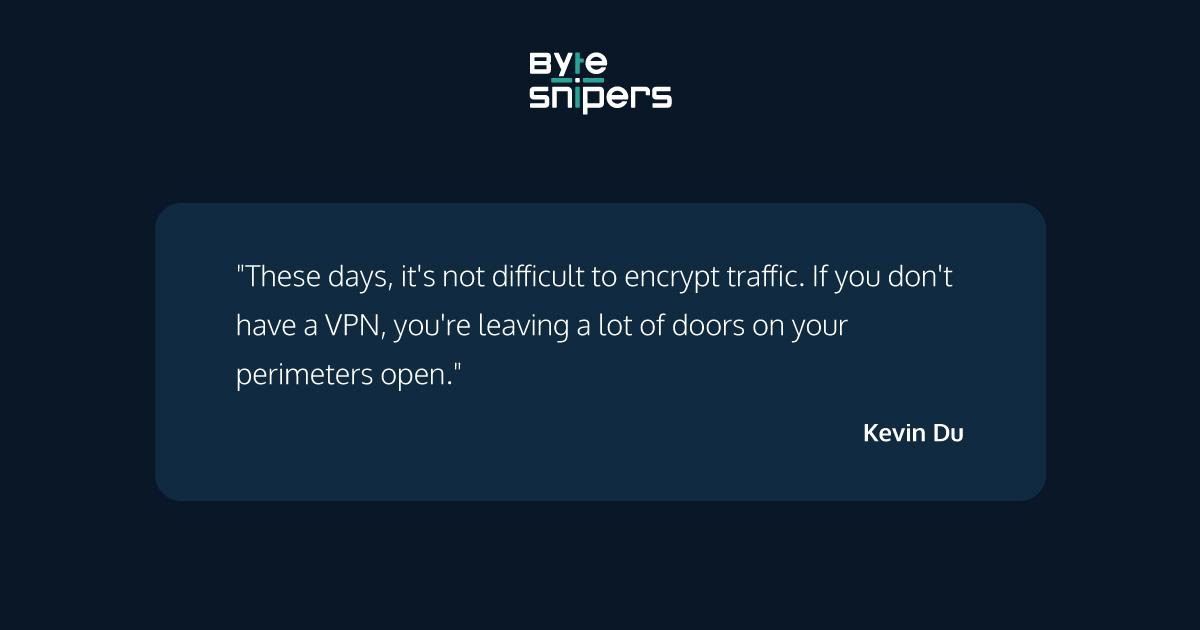 Smartphones, tablets, and smaller connected devices, often referred to as the Internet of Things (IoT), created a new challenge to corporate security. There are some groups of devices that typically do not come with promises of timely and continuous software updates, unlike conventional work devices. This is especially true on the Android front, where a large percentage of producers are embarrassingly unsuccessful in maintaining their products up-to-date. This applies to both modifications to the operating system (OS) and to the reduced monthly security fixes between them. Even worse are the many IoT devices that are not even built to get updates in the first place.

A powerful strategy goes a long way. There are Android devices that obtain continuous updates that are timely and accurate. It falls in the hands of an organization to build its own security network around them and maintain a safe digital environment.

Ad fraud may take many shapes, but malware is most widely used to produce clicks on advertisements that typically come from a real app or website user. A consumer could, for instance, download an app that provides a legal service, such as a weather forecast or an online chat. However, the app produces malicious clicks on legitimate advertisements that display on the app in the background. By far, the most popular platform for mobile ad fraud is Android.

Mobile advertisers and ad-supported publishers are the primary victims, but ad fraud still causes damage to phone users. Usually, publishers are compensated by the number of ad clicks they produce, so mobile ad fraud steals from the marketing budgets of businesses and can deprive publishers of income.

An efficient way to enhance app protection is to reveal all the vulnerabilities and fix them regularly. Today, we look at a penetration testing technique behind Android. The list below includes a repeatable procedure for organizations to implement. 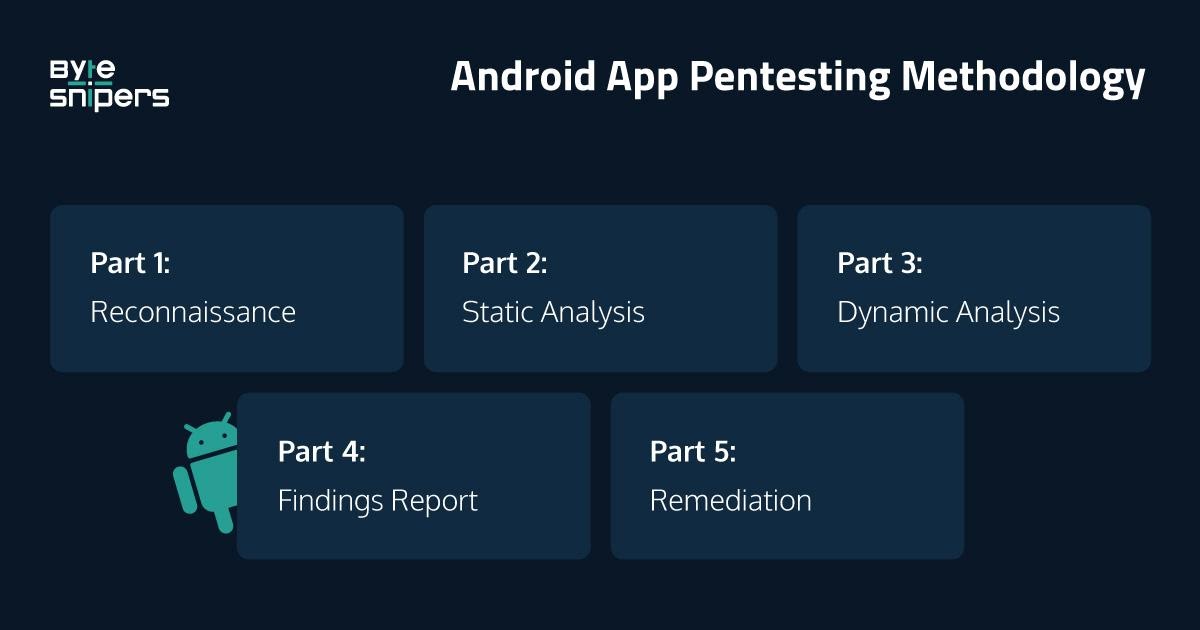 The early phase sets the stage for the greatest areas of risk that must be checked. The pen-testing team, therefore, needs to define the primary uses of the application in question. It is necessary to identify the data flow for possibly vulnerable areas as well as undefined libraries or functions, in addition to learning the complete spectrum of app functionalities.

In static analysis, the raw source code needs to be pushed down. This is in order for the team to consider whether any static data held in the APK can be used to crack the network security mechanism or extend the attack vector. This is achieved by decompiling the binary and the APK from the raw source code and disassembling them. Static analysis tests for, but is not limited to: Code Obfuscation, Identification and Prevention Mechanism for JailBreak, SSL Pinning Mechanism, Access Levels to Other Applications, System Secrets for Sensitive and Cleartext Application Storage.

This type of analysis allows bugs to be discovered at a particular time when the software is running. This usually entails connection to the functions that intercept the traffic in real-time through proxies. Popular application bugs to monitor are authentication and authorization defects, content spoofing, memory leaks, insufficient transport layer protection, application logic flaws, and cross-site scripting.

Treats should be risk-qualified via CVSS v3 and listed in a report as soon as all the flaws are identified, which will come with mitigation recommendations and specific objectives.

Seeing the business consequences and risk level of each vulnerability includes specifying the areas to be tackled first by the internal team.

Remediation can be done by the internal team or the security provider and will be in line with the results report's suggestions. To guarantee that vulnerabilities are fixed. An effective follow-up on these problems is required.

Not all bugs can be solved for the sake of time. Before making a decision to continue with a significant app upgrade, the company needs to consider the existing risks.

Is Android pen-testing worth the effort?

Supposedly, the safety attitude of an Android app is not focused on the modules within the app, but rather on the APIs and servers. External penetration testing with insecure direct object references and unsafe communications can help to uncover bugs that can and will be exploited by malicious hackers.

Manual penetration tests can be mixed with automated vulnerability scannings, which should take place more frequently. Since they don't take a long time, developers can integrate them into their workflow.

At ByteSnipers, we recommend businesses to follow both types of solutions so that they keep resilient and proactive about their apps' security. Contact our team to access additional info on Android pen-testing.

7 Devastating Cases That Could Have Been Prevented By Security Testing